I’m delighted to be hosting Charlie Laidlaw in my hot seat today.  Charlie is chatting to us about his novel, The Things we Learn when we’re Dead, a modern fairy tale which is also a rather unique re-telling of The Wizard of Oz.  Find out his inspiration, the scene he enjoyed writing the most and I think you’ll get a window into his sense of humour 🙂

I’m the author of two novels, The Herbal Detective (Ringwood Publishing) and The Things We Learn When We’re Dead (Accent Press).  A third novel, Darker Matters, is due to be published by Accent Press in January 2018.

I was born and brought up in the west of Scotland, and am a graduate of the University of Edinburgh.  I still have the scroll, but it’s in Latin, so it could say anything.

I then worked briefly as a street actor, baby photographer, puppeteer and restaurant dogsbody before becoming a journalist.  I started in Glasgow and ended up in London, covering news, features and politics.

Surprisingly, I was approached by a government agency to work in intelligence, which just shows how shoddy government recruitment was back then.  However, it turned out to be very boring and I don’t like vodka martini.

Craving excitement and adventure, I ended up as a PR consultant, which is the fate of all journalists who haven’t won a Pulitzer Prize.  I am married with two grown-up children and live in East Lothian.   And that’s about it.

Please summarise The Things We Learn When We’re Dead in 20 words or less.

The book is about how small decisions can have unexpected consequences and how, sometimes, we get a second chance.

What was the idea/inspiration for your novel?

The idea for the book came to me on a train from Edinburgh to London (which is apt because, civilised place that Edinburgh is, it’s the only city in the world to have named its main railway station after a book).  When I got home, I wrote the first chapter and the last chapter, so I knew from the start how the book would end.  The first chapter has changed out of all recognition from that first draft, but the last chapter is almost as I first wrote it.

It’s also a modern fairytale of love and loss.  It’s about the subtle ways in which we change.

On one level, the book is a simple story of a young woman’s life.  But, for those readers who want to make the connection, The Things We Learn is also a retelling of The Wizard of Oz: how a young woman in ultimately tragic circumstances comes to reassess her life and find a new beginning.

If you could choose to be one of your characters in your novel, who would you be?

I wouldn’t really want to be any of them.  That’s not because I dislike them, but because they become real people to me.  The main characters tell me what to write, and tell me if I get a bit of narrative or dialogue wrong.  In a way, they write the book.  All I do is just listen to them.  So, becoming one of them would be a bit creepy!

Please tell us about the characters.

The book centres on one character, Lorna Love, who is feisty and funny but a bit damaged.  She’s young and torn between wanting material things but also wanting to do good for the less privileged.  The book is, I suppose, about how she finally grows up.

If you could have given your characters one piece of advice before the opening pages of the book, what would it be …

If you ever come across an author called Charlie Laidlaw, for God’s sake don’t talk to him.

What scene did you enjoy writing the most?

The last chapter, because I knew it was where I wanted the book to end.  It was a great feeling to know that I had a finishing line.  All too often, books dribble away towards the end, as if the author simply wanted to finish it, but without having a clear idea of how it should finish.

The first chapter which, for me, is always the hardest.  At that point I didn’t really know my characters, and didn’t know what they’d say or do in any given situation.  Once I got to know them better, I was able to go back and rewrite the first chapter.

Who would you cast in the role of your characters if your book were optioned for a movie?

The book does have a number of real characters playing cameo roles – the likes of Kate Winslet, Sean Connery and Hugh Grant.  So they’d obviously have to be in it.  However, the main character is a nobody trying to be a somebody.  She’d have to be played by an unknown young actress.

What inspired you to write Charlie?

I can’t remember a time when I didn’t write.  I wrote my first “novel” at about the age of fifteen, which I then burned at the age of sixteen.  It was probably for the best, as a Nazi plot to resurrect a Fourth Reich from a base in the Norfolk Broads seemed idiotic, even to me.  My second “novel” (still hand-written) was completed about a year later.  I still have the manuscript, but nobody is ever going to read it!  (An accidental revolutionary falling in love with an angel is even more idiotic).  In the years since, I started on numerous projects, but never finished anything.  I suppose, life got in the way.  It wasn’t until a small handful of years ago that I got a grip and made myself write with greater purpose.

Finally, can you share with us what you’re working on now?

It’s called Darker Matters and is a dark comedy about love, death, family and particle physics.  It’s also a satire on the unintended consequences of celebrity.  It’s a tragic-comic story, aimed at both male and female readers, but I hope it has heart, humour and warmth.  Its central message is that, even at the worst of times, a second chance can often be just around the corner. It’s due to be published by Accent Press in January next year.

Thank you for being my guest today.

Wishing you success with all your projects Charlie. 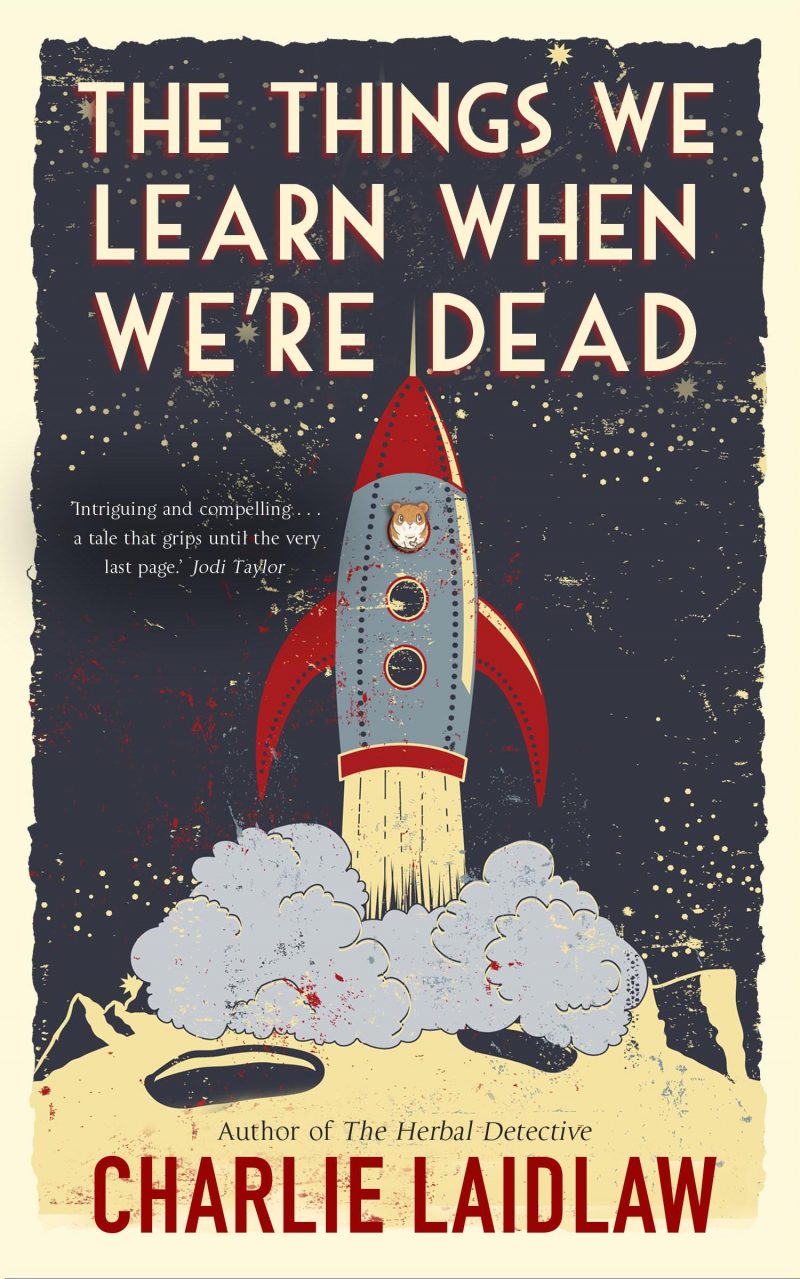 On the way home from a dinner party she didn’t want to attend, Lorna Love steps into the path of an oncoming car. When she wakes up she is in what appears to be a hospital – but a hospital in which her nurse looks like a young Sean Connery, she is served wine for supper, and everyone avoids her questions.

It soon transpires that she is in Heaven, or on HVN. Because HVN is a lost, dysfunctional spaceship, and God the aging hippy captain. She seems to be there by accident. Or does God have a higher purpose after all?

At first Lorna can remember nothing. As her memories return – some good, some bad – she realises that she has decisions to make and that she needs to find a way home…