I’m delighted to be taking part in A Jersey Dreamboat blog tour today with a Q&A. 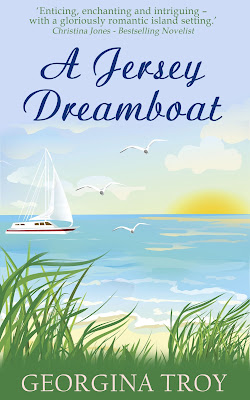 The third instalment of the captivating Jersey Scene series. Izzy and her best friend Jess are badly let down when a Jersey socialite, who has agreed to hire their entire vintage party stock for her upcoming wedding, decides to elope instead – leaving the girls with no bookings and no money. Feeling despondent, the girls try a night out to cheer themselves up, and meet the captivating and aristocratic Ed, who invites the girls on a cruise to Nice on his yacht, together with his two brothers. Romance builds on the luxury trip, but when a last-minute wedding booking is offered, the girls must return to Jersey, and real life has to begin again …or has it?

A Jersey Dreamboat can be read as a standalone.

Event planners, Izzy and Jess, are let down by a local socialite. Unable to find replacement bookings, they accept a life-changing invitation. (Sorry, I’ve used 22 words).

What was the idea/inspiration for your novel Georgina?

A Jersey Dreamboat is a work of fiction but it was inspired by a trip I took with a friend, Carol, a few years ago. We were both invited to a joint birthday party where we met these three brothers who invited us on a cruise to the South of France. The brothers had the same unexpected background as those in the book and we did stay with their family in a home similar to the one I’ve written about, but what happened between the characters is fiction, I promise! (we believe you …)

Did you travel to any places? Undergo any new experiences?

I did travel to the places in the book during our trip, so it was lovely revisit them online for research for this book.

Do you have a favourite place you go to for inspiration Georgina, or a favourite activity?

I live near to several beaches – which most people do in Jersey to be honest – and I walk the dogs on the beach or round one of the two large reservoirs we have locally for my best inspiration. Being stuck in traffic and ironing has also inspired many plot strands, but those activities aren’t nearly as enjoyable as walking the dogs.

Do you have a theme for your book covers? Who designs them?

I was very lucky with my original cover for the first book in my series, A Jersey Kiss, which I originally self-published. The cover was designed by the very talented Kirsty Greenwood and her partner Edd Jordan. Accent Press have changed it slightly and redesigned the second cover. The covers for my third and fourth books in the Jersey Scene series – A Jersey Dreamboat and A Jersey Bombshell – have been designed by Accent Press in the same theme and I’m delighted with them. (They are gorgeous covers)

How do your characters come into existence? Do they have a bio?

I always find a picture of someone who looks as similar to my characters as possible. The inspirational picture I used for the character of Ed, the hero in A Jersey Dreamboat, was a picture I found in a magazine of a sexy farmer. The picture I used for inspiration for book four, A Jersey Bombshell, was a marine explorer, which my hero also happens to be. I have to admit that Henry Cavill, our very own gorgeous Jersey hero, happens to look very like Sebastian Fielding in A Jersey Affair, well a cross between him and Santiago Cabrera. I have to do small bios for each to ensure that I have a clear picture of each of the characters and keep to them throughout the writing of the books.

Panster or a plotter?

I’m a bit of both. I start with an idea and write an outline of the book I initially intend writing. Then, I choose the names of the characters and after that I find the characters become more rounded as I write the first draft. The rest of the ideas for scenes slowly develop. Then the editing begins…

What’s in the future for the series?

A Jersey Dreamboat is the third book in my Jersey Scene series. Each book is a stand-alone story, but you’ll meet characters from each of the books when they pop up throughout the series. The fourth book in the series is called A Jersey Bombshell and is due to be published in April 2016. I’ve written the book and am about to send it to my editor, and then the edits begin.

You mentioned the first book in the series, A Jersey Kiss, was self-pubbed Georgina.

Are there any tips you could share that worked well for you?

I initially self-published the first two books in my Jersey Scene series. Accent Press then signed me and relaunched both books and contracted me to write two more. A Jersey Dreamboat is the first book I’ve written for them and it’s incredibly exciting to see it being published with such a well-respected indie publisher. The most important thing about self-publishing is probably making sure you have an attractive, professional looking cover, but that won’t save your book if you haven’t edited it as much as you possibly can to eliminate all the typos. I still cringe when I think how my first version of A Jersey Kiss was sent out into the world with typos, especially when I could see how many people had bought copies, mortifying. Thankfully a good writer friend contacted me very quickly and told me, so I immediately withdrew the book from Amazon and went through it again. It’s easy to get carried away with the excitement when you self-publish. Professional editors and beta readers are a must if at all possible. You’ll also need an online presence if you want your book to be noticed over the hundreds of thousands out there. It is great fun though and well worth doing. (thank you for sharing – I’m sure your experiences will help others)

Finally Georgina, have you joined any writing groups?

I’m a member of the Romantic Novelists’ Association and have been for several years. Their New Writer’s scheme, which is open for applications at the beginning of each January and filled within approximately a week, was a fantastic help with my writing development. Members of the New Writers’ Scheme are allowed to submit one full or partial manuscript each year for a detailed report by an anonymous published author. The reports I’ve received all held valuable constructive criticism as well as positive comments. It’s a great scheme for new romance writers to join.

I’m also a member of the Jersey Writers. We’re a group of writers ranging from fiction, factual books, poetry, screenwriters, etc. We published our first anthology in May and have already enjoyed workshops and talks including one recently by the incredibly successful self-published author, Rachel Abbott. The group has only been going for just over a year but is growing from strength to strength and will probably have an exciting announcement soon.

Thanks very much, Shaz.

Georgina Troy lives on the island of Jersey and when it’s dark she can see the lights in France from her bedroom window. This isn’t surprising as Jersey is only fifteen miles off the French coast. She’s an impossible romantic and likes nothing more than creating gorgeous heroes. Her books are published by Accent Press.

YA | Interview | No Entry | Gila Green