Jera's Jamboree receives compensation for adverts and affiliate advertising. As an Amazon Associate I earn from qualifying purchases. Please see my disclosure policy for more information.

You may remember I was looking for a new fantasy series to get caught up in so when I was offered a copy of The Conjurers to review it was hard to say no.  David Waid said:

It is an 88,000-word historical fantasy, a fast-paced magical adventure set in the 14th century, with action spanning the breadth of Europe, from Genoa to Ireland. The Conjurers is crafted with rich language and bold, complex characters.

I certainly couldn’t resist!  And I’m so glad I didn’t … 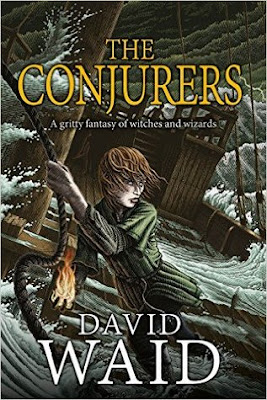 A WAR FOR MAGIC IN THE MIDDLE AGES

Orphaned in the year 1380, Eamon and Caitlin flee their home in the Wicklow Mountains of Ireland. The siblings can pacify savage wolves and control forces of nature, but only the murderers hunting them know why.

As Eamon and Caitlin fight for survival, Teresa de Borjas, the spirited daughter of a Genovese nobleman, develops an inexplicable ability to move objects with her mind. When her brother is murdered and her father imprisoned through machinations of the reclusive alchemist, Maestro Lodovicetti, her sheltered life changes forever.

Journeys of discovery and the pursuit of blood vendetta bring Eamon, Caitlin and Teresa together across the stunning backdrop of medieval Europe. The three must master their powers and defeat a cabal of the world’s greatest magi or be killed as the Age of Kings comes to an end and a tyranny of sorcerers begins.

With the first book in a series the story sometimes has a slower pace as the world building takes place and the foundations are laid for what is to come.  Not so with The Conjurers.  From the moment the story begins in the winter of 1380 we start off at a cracking pace which continues throughout the story.

15 year old Eamon and his family have had to abandon their home in Eniskeegan following a warning from Father Rhys.  Straight away we’re drawn into his emotions through loss. The setting is isolated and their refuge in sightless Nairn’s cottage is dark with the unfolding events that happen to propel them onwards. Both Eamon and 12 year old sister Catilin’s gifts start to open in response to threat and survival.

14 year old Teresa knows that something isn’t right as she follows her brother Ignacio to his apprenticed home of alchemist Salvezzo Lodovicetti.  We witness much depravity and darkness as Lodovicetti practices his dark arts.  Teresa’s gift begins as her brother is in danger and the powerful emotion linked with vengeance.

Narrated in alternating chapters, our three leads go through some dark and threatening times.  Parts of the story are very surreal and have a dreamlike quality while others are pulse pounding and tense.  I have to mention Teresa on the ship in the storm.  David Waid uses nature to full effect to build suspense and terror and I lived through every single second with her.

Sairshee is a character who interests me.  We only ever see her work alone (although she is rumoured to have the King’s protection).  She is a complex character being at once confident and arrogant but at times her fear is palpable.  There is a purpose in something she achieved even though it includes failure.  She is the only character I haven’t been able to fit into place in the larger picture yet.

All events on this quest have a place in gathering our three leads together with the Maleficarum.  The culmination of a magnificent and awe inspiring scene at the Inn of the Three Shrikes had the hairs on the back of my neck up.  I felt every single energy and emotion in that room.  So many emotions.  A dark and shadow time filled with death and destruction and yet filled with hope and understanding,  letting go and moving on.

Eamon and Teresa’s power in its uncontrolled and fledgeling state is raw and unpredictable.  Caitlin’s role has a different purpose.  With all three I’m excited about what will happen next as they make their way to Nairn’s people.

This is a totally engrossing debut.  One of my top reads this year, if you’re a fantasy reader you must read The Conjurers.  £2.99 on Kindle you will get so much for your money!  Don’t miss it!

DAVID WAID is an American writer and political consultant. Born in New York City in 1964, David grew up in Manhattan’s SoHo, attended grade school in Chinatown, joined the punk rock scene in the late 70’s, studied history and participated in archeological digs during summers. He now lives in Arizona with his wife of 22 years, three kids, and a craven, food-obsessed puggle whose name means “Battle Lord” in Gaelic.

I've been blogging about my interests at Jera's Jamboree for 8+ years. My love of reading, crocheting and being out in nature are all things that help me unwind from my role as an Inclusion Lead in a primary school. I'm passionate about early help and sharing strategies with families to empower and help build resilience. I'm a member of of my Local Authority's Early Help Operational Board, working alongside other professionals to instigate change and growth.

Literary Fiction | Review How to Keep a Secret by Sarah Morgan

Women’s Fiction | The Summer of Impossible Things by Rowan Coleman

Join in my reading challenge